Trumpeter swans are the largest species of native waterfowl in North America.
Adults of both sexes have white feathers and black bills, legs and feet. In adults, plumage of the head and upper neck is sometimes stained reddish brown from the high iron content of the water in which they forage for vegetation and sometimes fish. Young trumpeter swans, or cygnets, are typically grey with grey-pink legs, feet, and bills. The brassy trumpet-like call for which the species is named helps distinguish trumpeters from the tundra swan, whose voice is softer and more melodious. The wedge-shaped bill of the trumpeter swan also helps to differentiate it from the smaller tundra swan, which has a sloped bill.

The trumpeter swan gets much of its food by dabbling, using its long neck to reach for submerged vegetation. It supplements its diet with invertebrates and occasionally small fish and fish eggs. In winter, they will eat grasses, grains, and tuberous crops.

Trumpeter swans find mates at three to four years of age and typically mate for life. Once the nest has been constructed, females, or pens, lay an egg every second day until they have produced the full clutch, which averages five to six eggs. After hatching, the young cygnets stay in the nest with the pen for about a day until they are able to stay warm on their own. The young then remain with the adults until they return to the breeding ground the following spring.

Birds breeding in coastal Alaska and Canada move to ice-free waters in the Pacific Northwest and British Columbia for winter. 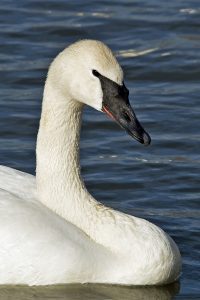 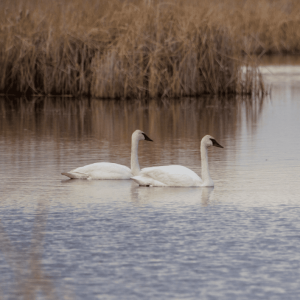 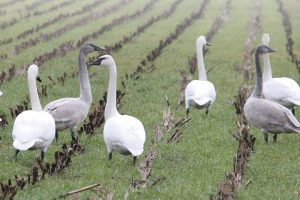 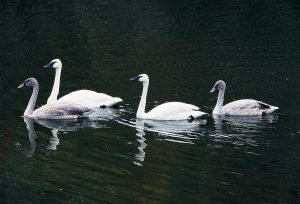 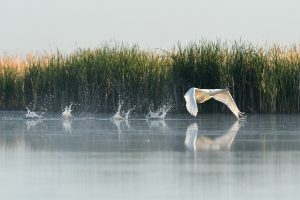