You were banded at Frank Lake near High River, Alberta one late summer day by a Ducks Unlimited Canada scientist.

You had just learned to fly.  Your parents arrived in Alberta late in the spring after a long migration from their winter home. After mating, your mother laid you and nine other eggs in a nest hidden by prairie grasses. Your mom chose a spot near a wetland, so she could feed every day on the rich invertebrates and plant seeds she likes to eat during nesting.

Once you grew your flight feathers, it was time to migrate south to the wetlands along the Gulf Coast of Louisiana and Texas in the United States. Since you are a small duck, your family was one of the first species to fly south when the weather turned cold. Some blue-winged teal fly all the way to Mexico and South American countries like Venezuela. There, people speak Spanish, and call you a “pato” (which means duck). 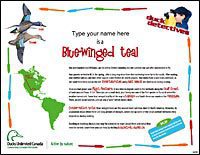