Adult male bufflehead have a white body, black back, and a dark head with a large white patch that wraps around the back of the head. Females and juvenile males are gray-brown, with an oval-shaped white cheek patch. Adult males have a large white patch on the upper wing, females and juvenile males have a smaller white wing patch.

They breed near lakes in northern forests, most often in mixed deciduous and coniferous forest.

Bufflehead dive for aquatic invertebrates, crustaceans, and mollusks. They dive for on average 12 seconds, and surface another 12 seconds or so before diving again. They usually swallow their food while still underwater. They eat some plant matter in fall and winter, primarily seeds of bulrushes and pondweeds. Downy ducklings occasionally dabble at the surface rather than diving.

Like its close relative, the common goldeneye, the bufflehead nests in cavities in trees close to water, often in the abandoned homes of flickers and other woodpeckers. Females lay a clutch of 4-17 eggs.

Bufflehead can be found across western Canada, and as far north as Alaska.

Their wintering grounds include the west and south of the United States and the northernmost parts of Mexico. 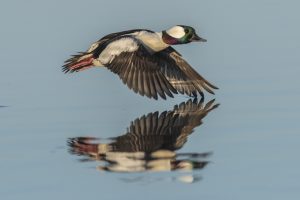 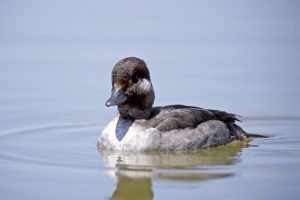 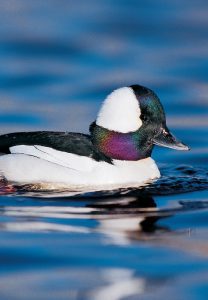 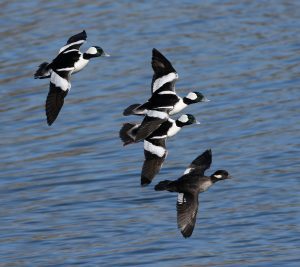 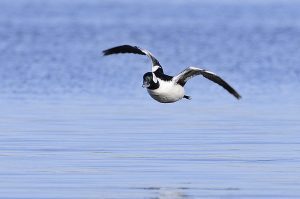