A duckling left behind

When a duckling hatches in the wrong nest, its journey to a life-sustaining wetland gets complicated

Ducks Unlimited Canada (DUC) staff and volunteers have been installing nest boxes along the Wolastoq (Saint John River) for years. The boxes provide attractive nesting sites for cavity-nesting birds, and valuable information for research about how waterfowl use nest boxes.

When ducks started to return to New Brunswick this spring, former DUC Volunteer of the Year John Johnston got ready. He checked the nest boxes he installed on his property and at the DUC Fredericton office. He tested the cameras he installed inside the boxes. And he watched for potential nesters. Wood ducks and hooded mergansers milled around the nearby wetlands and examined these potential nest sites. Then, in mid-April, a wood duck hen claimed the nest box at the DUC Fredericton office and laid her clutch of eggs.

About four weeks later, the ducklings hatched inside the wood duck’s nest box—about 12 in total, including one goldeneye duckling. This “odd duck” was in the nest because of a practice known as interspecific brood parasitism. Simply put, a goldeneye hen snuck one of her blue-green eggs in with the wood duck’s clutch.

The next day, the wood duck ducklings leaped from the nest box and followed their mother to the nearby Saint John River. But the hen left the goldeneye duckling behind.

The goldeneye duckling later jumped to the ground on its own and roamed the area, making “peeping” sounds in an attempt to locate its brood. But its calls went unanswered—the wood ducks were gone.

Knowing that wild animals do best when left in the wild, DUC staff searched for a newly hatched goldeneye brood that might adopt the orphan duckling. Unfortunately, none were found nearby. So the duckling has been given its next best chance at survival, with the Atlantic Wildlife Institute. There, it has survived its first few days—the most uncertain period for a new duckling—and will be cared for until it’s ready to be released at a wetland this summer. 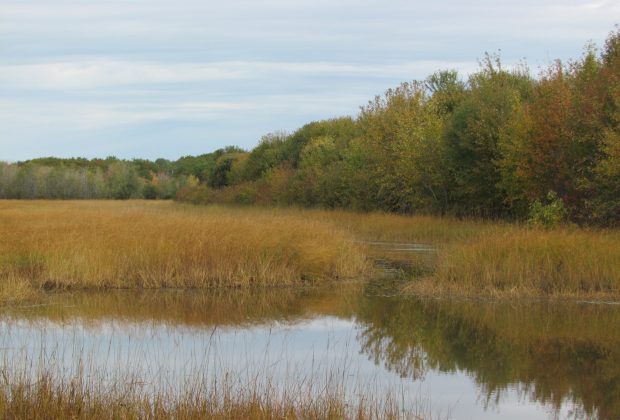