Some Interesting Facts About Ducks Unlimited

A glimpse into Ducks Unlimited’s early work on the Canadian prairies, as captured in this entertaining story from Hunting and Fishing Magazine, December 1938.

Fifteen thousand American wildfowlers have been writing conservation history the past summer in the greatest duck producing territory on the continent. Tucked away in remote corners of Alberta, Saskatchewan and Manitoba are landmarks of their work-monuments to practical game restoration that mean hundreds of thousands more waterfowl for this and the coming generation of sportsmen.

It all started with a get-together of but a score or so of the country’s outstanding wildfowlers at the Chicago Club, last March. Among them were that grand old California sportsman, John B. Coleman of San Francisco; Dr. James C. Clark of Sioux Falls, South Dakota; Louis H. Egan of St. Louis; Judge E. L. McHaney of Little Rock; Louis H. Barkhausen of Chicago; Harold W. Story, of Milwaukee; John C. Huntington of New York; Philip C. Barney of Hartford, Connecticut-just to name a few.

All paid their own carfares. Every one realized the need for practical field work, promptly applied, if the decline of American waterfowl was to be halted. They recognized the growing demand (long manifest by lack of unity among wildfowlers in all parts of the country) for a national organization specializing in the particular interests of what Grover Cleveland labelled “The Serene Duck Hunter.”

The little group meeting at Chicago launched Ducks Unlimited, Inc., the country’s first nation-wide organization of wildfowlers. Preliminary organization work, practically all of it, had been sponsored by the More Game Birds Foundation. Surveys by the Foundation had revealed that the bulk of our finest sporting ducks nested in Canada. But the progressive drying up of these Canadian breeding areas by agriculture and drought had left nearly 80 per cent of them barren wastes in southern parts of the provinces.

Crows, too, were found to be the worst natural enemy nesting waterfowl had to contend with in the Canadian prairie and bush country where the black nest robbers were found guilty of destroying 31% of over 500 duck nests studied in specific localities. As a duck egg gourmet, Jim Crow has no equal among all predators roaming Canada’s great duck factory. 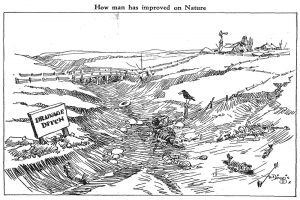 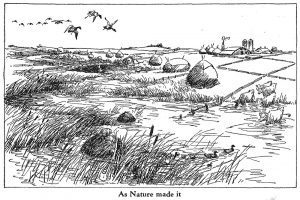 There are more mallard, bluebills, teal, spring and whatnot this fall because of simple dams installed by Ducks Unlimited last spring to store up snow water—principal source of water for the entire year—at Big Grass Marsh, Manitoba; Waterhen Marsh, Saskatchewan; and at the scores of localities where the Canadian government’s $3,500,000 Prairie Farm Rehabilitation Administration has been cooperating. Also, there are more ducks because of conservation measures in the United States-but principally because old Jupiter Pluvius turned his rainclouds loose the past summer up there in that section of western Canada to which over 70% of the ducks flock on nuptial flights.

In Manitoba alone, crow eggs collected up to July, principally by 29 rural schools: 5,135

Ducks salvaged by rescue crew of school children in one day at Many Islands Lake, Alta., when it went dry in August: 720

Negotiations and surveys under way on:

The foregoing are merely a few examples of activities reported by Ducks Unlimited. Others which may be cited are the appropriation of $5000 by the Alberta government for awards in a co-operative crow control campaign in which Ducks Unlimited also is contributing $1300. A similar anticrow drive has been under way the past summer in Saskatchewan. In that province the Department of Natural Resources has put up $4500 and Ducks Unlimited another $1300. Manitoba, also, has been doing its part with payment of five cents per pair for crow feet, while Ducks Unlimited and the Manitoba Game and Fish association pay school children two cents apiece for crow eggs.

Not the least of the accomplishments in Canada has been the enlisting of a volunteer corps of Canadian co-operators called Ducks Unlimited “Keemen.” Members of this corps—all sportsmen and conservationists who know waterfowl conditions in their localities—organize rescue crews to salvage drought-stricken ducklings, direct and report on surveys of local duck populations, assist in obtaining co-operation of landowners, and perform other jobs-entirely without compensation.

During the month of July, 1089 of these “Keemen” filed statistical reports in the second wild duck census ever taken in the prairie provinces. Their reports gave figures on the numbers if ducklings to the brook and other comparative statistics which, when all were compiled, enabled an estimate to be made, revealing a 20% increase of ducks in the three provinces this year.

This practical restoration work and fact gathering has been made possible by America’s duck shooters who, through their membership contributions to Ducks Unlimited, provide the wherewithal to bring back their sport. All national officers serve without a penny of financial compensation. The only salaries paid go to the Canadian field staff of engineers and technicians who plan and direct the actual field work.

National Headquarters are at 500 Fifth Avenue, New York, where contact is maintained with State Ducks Unlimited Committees of nearly forty states. It is with these state organizations that wildfowlers become members of this great movement. Any duck hunter can enlist through his state committee, or by writing National Headquarters in New York or the western office at 531 Russ Building, San Francisco.

Ducks Unlimited is earning the support of every wildfowler interested in the preservation of his sport. The work this first national organization of wildfowlers is doing deserves that support-your support.

Youth Advisory Council members take to Manitoba’s wetlands and grasslands to gain firsthand knowledge from experts in the field.

When you cook, how often do you think about how sustainable your ingredients might be? This farm-to-table menu might surprise you.