Very few people can say they’ve hunted waterfowl in nearly every province in Canada. Still fewer can say they bought their first life insurance policy at the age of 24. Dean Hynes can.

Very few people can saythey’ve hunted waterfowl in nearly every province in Canada. Still fewer can say they bought their first life insurance policy at the age of 24.

Dean Hynes can. When the now 43-year-old Hynes decided to leave a gift of life insurance to DUC, he was able to satisfy both his passion for conservation and personal commitment to financial health.

“The first thing I did when I graduated from university was take out a whole life policy, which was fairly inexpensive at that time, around $30 per month,” says Hynes, who lives in Grand Falls-Windsor, N.L. “I wanted to leave something to DUC and recalled an article in Conservator  I had read about planned giving, and the tax benefits of gifting a life insurance policy. It was an easy decision to make.”

Hynes’ decision had a lot to do with his wetland and waterfowling excursions starting at a young age. “I’ve been an avid waterfowler since I was a kid and went hunting with my dad,” Hynes says. “There’s not a lot of opportunities here in Newfoundland, but it made such an impression on me. It wasn’t about the bounty.”

His connection to waterfowling, to conservation and to DUC got stronger over time.

“When I got out of university I went to P.E.I. to hunt – a place just getting known for its waterfowling opportunities – and it was also the first time I got to see a DUC project,” he says. “At about the same time DUC started a volunteer chapter here at Grand Falls-Windsor, and I started to go to dinners.”

Soon, Hynes became a DUC volunteer himself, serving 10 years as a committee member.

He also began to venture further afield to pursue his hunting passion. In southern Ontario he visited Hullett Marsh, Luther Marsh and smaller DUC projects. “I began to see that these marshes and wetlands were not only for like-minded people like me involved in shooting sports. I saw that people could enjoy them for quite a few other pursuits, like canoeing, walking and birdwatching,” Hynes notes.

Ten years ago Hynes travelled to Saskatchewan where he found himself impressed by DUC’s presence on the prairies. “You could really see benefits of the work DUC was doing in terms of birds in the sky,” he says. “I’ve been going on hunts near Jackfish Lake for six years now and it’s incredible to see birds use that habitat since DUC took over the project, and people using it during summer months.”

Closer to home, Hynes has found other reasons to support DUC.

The Birchy Basin project located on Newfoundland’s northern peninsula is on a main waterfowl migration corridor. “Since DUC built the project and regulated the water supply, birds, salmon, even canoeists, are enjoying the benefit of DUC dollars,” Hynes says.

Hynes and his business partner sponsor a summer camp for kids at the Corduroy Brook enhancement project in Grand Falls-Windsor. “Without DUC doing that project, we wouldn’t have kids getting the education about wetlands and what they do.”

For Hynes, leaving a portion of his estate to DUC means there will be an ongoing investment in natural areas he has come to enjoy and respect. He’s comfortable with his decision. “I can’t think of a better conservation organization or one that can make more of an impact than DUC.” 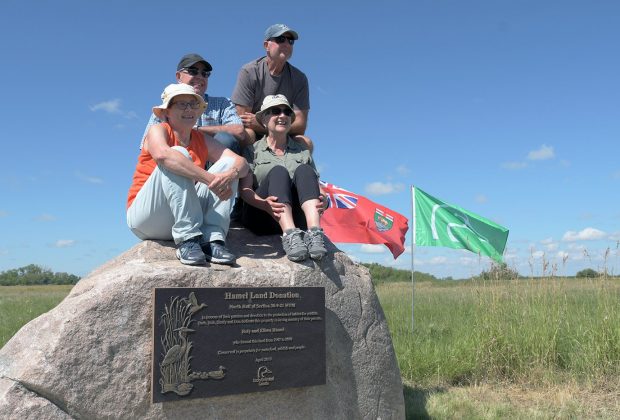