The blue-winged teal are the second most abundant duck in North America, behind the mallard. Like other teal, they are the half-pints of the duck world. About half the size of a mallard, the blue-winged teal are easily recognized by their grey-blue shoulder patch and by the male’s white head-crescent and flank patch. The female is drab and mottled brown and her wing patch is subdued with an almost black-green speculum and no white border. The male’s bill is blue-black and the female’s is dusky with black spots.

Prefers grasslands bordering small potholes and other freshwater wetlands. They like to find concealed spots to forage or rest. Diet changes dramatically with the seasons. They mainly feed on plant matter, but females predominantly eat invertebrates during breeding. They are a dabbling duck, and rarely dive.

Blue-winged teal breed from Alaska to Nova Scotia. They establish pairs on wintering grounds and during spring migration. Hens lay an average of 10 eggs and add down feathers to aid in incubation, which lasts 24 days.

Blue-winged teal are long distance migrants, and some birds fly all the way to South America for the winter. They begin their fall migration early, leaving breeding grounds well before other species in the fall. 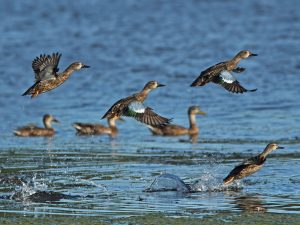 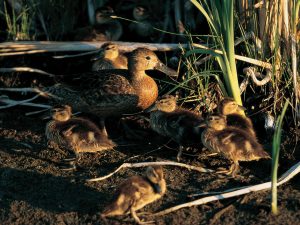 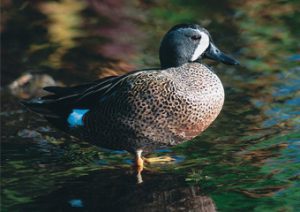 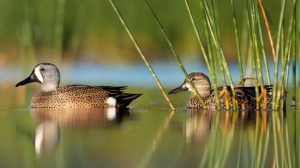 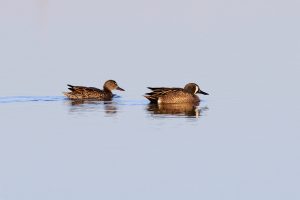