Canvasbacks are a large diving duck. Breeding males have a gracefully sloped black bill, russet coloured head and canvas-white back, for which the species is named. Hens are coloured to blend with their surroundings while on the nest, and have a reddish-brown head, neck and chest, and a mottled light brown back.

They are physically specialized to consume subterranean plant parts and benthic invertebrates, and procure a great deal of their food by rooting through wetland bottoms with their bills.

Canvasbacks begin to pair during their return to breeding grounds in the spring. Drakes perform a number of impressive courtship displays during the breeding season. The hen selects the nest site and typically uses the same home range each year. The floating nest is constructed using vegetation and consists of a platform of interwoven plant material often in dense vegetation. The hen lays one egg a day, producing an average clutch of eight or nine eggs. In reaction to periods of extreme drought, the canvasback delays breeding or defers breeding altogether.

Canvasbacks breed from Alaska through the Yukon and western edge of the Northwest Territories to the parklands and mixed prairie of central North America.

Canvasbacks winter along three coasts, principally from San Pablo Bay along the Pacific, to coastal Louisiana, to the Chesapeake Bay on the Atlantic. Inland, Catahoula Lake in Louisiana has recently hosted the world’s largest single aggregation (sometimes > 70,000) of wintering canvasbacks. 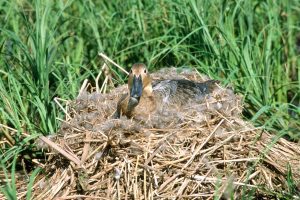 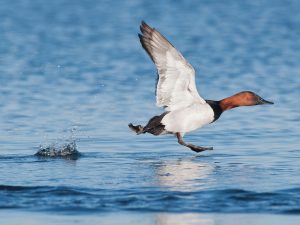 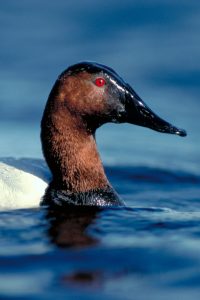 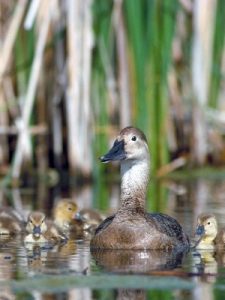 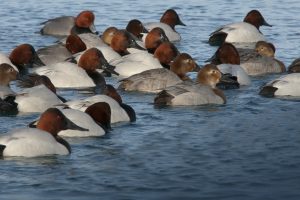