The common eider has a distinctive long wedge-shaped bill. Breeding males have a white face, neck, breast and back, with black crown, sides, belly and tail. Their nape is green, and bill is grey-green, orange, or yellow. Females are brown with black barring, especially along the sides; and their bill is grey.

About 75 per cent of their diet is mollusks, the rest being a variety of crustaceans. They dive to depths of 20 m to feed on mollusks and crustaceans including mussels, clams, scallops, and urchins.

Common eiders breed on marine coasts from Alaska and arctic islands along ponds and lagoons near the ocean from Husdon bay and James bay and along the east coast as far south as Maine.

Females alone incubate eggs for 26 days after she lays her 2nd or 3rd egg. Females do not eat during the incubation period and take short breaks only to drink. Hens can lose up to 45% of their body mass during this period. Non-breeding females often join breeding females to help protect the young from predators.

They winter in southern Alaska, Hudson Bay, and the northern Atlantic southward to New Jersey offshore near marine shoals. 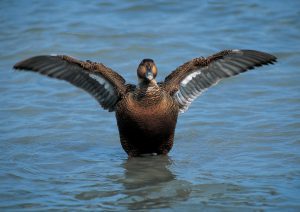 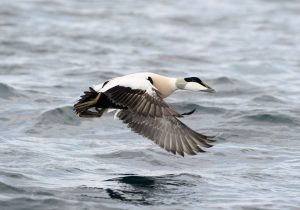 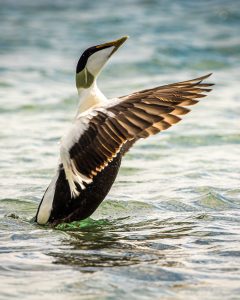 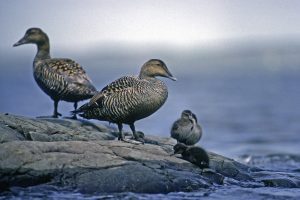 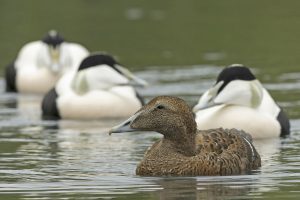