The great blue heron is a large bird with a slate-gray body, chestnut and black accents, very long legs and an “S” shaped neck. It has a thick, dagger-like bill.

Look for great blue herons in saltwater and freshwater habitats, from open coasts, marshes, sloughs, riverbanks, and lakes to backyard ponds. They can also be found foraging in grasslands and agricultural fields.

Great blue heron are large wading birds who primarily feed in shallow waters. Their diet consists mainly of small fish, though they have also been observed feeding on shrimp, crabs, aquatic insects, small mammals, amphibians, reptiles, and birds. Herons locate their food by sight and usually swallow it whole.

Great blue heron mainly nest in trees, but will also nest on the ground, on bushes, or on structures such as duck blinds, channel markers and artificial nest platforms. Males arrive at the colony and settle on nest sites; from there, they court passing females. Colonies can consist of 500 or more individual nests, with multiple nests per tree built high off the ground. Males gather nest material and present it to the female to weave the nest.

Great blue heron are found throughout most of North America, as far north as Alaska and the southern Canadian provinces in the summer.

In winter, the range extends south through Florida, Mexico, and the Caribbean to South America. Birds in the northernmost part of their range are migratory and winter along the southern United States coasts. 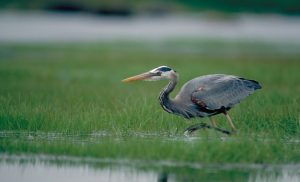 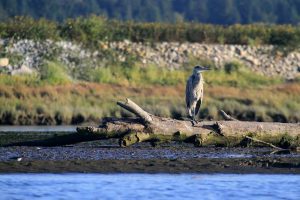 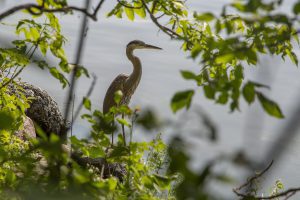 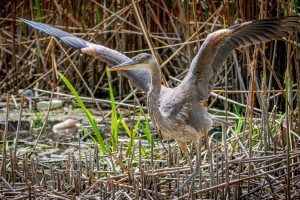 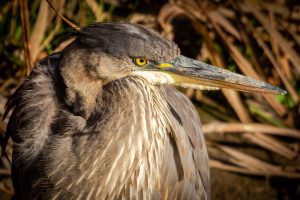