The green-winged teal is North America’s smallest dabbling duck. Males have a spotted pinkish breast, speckled grey sides and a grey back, whitish underparts, reddish brown head with green strip that extends through the eye, green wing bars bordered with buff, vertical white stripe in front of a wing and a buff and black area at the base of the tail. Females are mottled brown overall with whitish underparts and have green wing bars bordered with buff.

Prefers shallow ponds with lots of emergent vegetation. Along the coast, it prefers tidal creeks, mudflats and marshes to more open water.

Green-winged teal are dabbling ducks. Their diet is varied, including insects and aquatic vegetation, and changes with availability of food.

Green-winged teal form pairs on their wintering grounds, during spring migration or on breeding grounds. They pair late relative to other dabblers. Females select nest sites in dense vegetation, and lay an average clutch of 10-12 eggs at a rate of 1 egg/day. Females incubate eggs for 20-23 days after the last egg is laid. Males abandon females to undergo a feather molt shortly after incubation begins.

Green-winged teal winter along the Pacific coast from Alaska south, in most of the United States, Mexico, and the Caribbean. 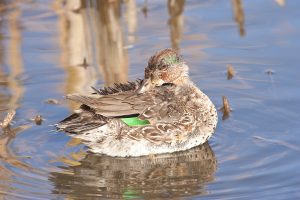 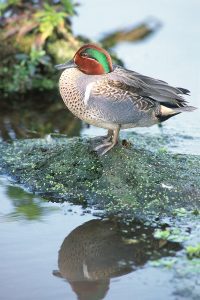 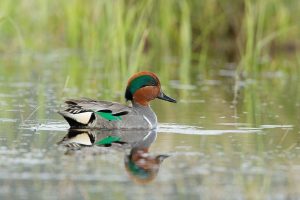 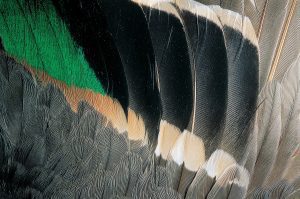 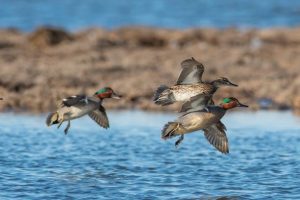