Harlequin males are slate blue, with black-outlined white striping and on the head, chest and back and rust-coloured accents on the body. Females are well-camouflaged in basic brown, with distinctive white marks on the face and head.

Harlequin ducks feed by diving underwater – up to 20 metres, propelling themselves with their feet, and steering with outstretched wings. Their diet consists of aquatic invertebrates and small fish. On breeding grounds, they will eat aquatic insects such as midges, and fish eggs. On wintering grounds, they eat tidal marine invertebrates, including crabs, amphipods, barnacles, mussels, limpets, perinwinkles, snails, and insects.

Their nests are built from conifer needles, mosses, leaf litter or small stones and lined with down feathers. Nest sites are chosen by females on cliff ledges, in holes in trees, and sometimes on the ground. Females lay 4-8 eggs and incubate eggs for 27-29 days.

Harlequins can be found on the east and west coasts of North America. Eastern range extends from Greenland and Labrador as far south as New Jersey. Western range is from Kamchatka Peninsula and Siberia north across the Bering Strait and back down through Alaska, inland throughout much of the Rockies, and as far south as the central California coast. The ranges are separate and populations are much higher in the west.

Some southward migration takes place but most movement is inland for breeding and nesting and seaward for wintering. 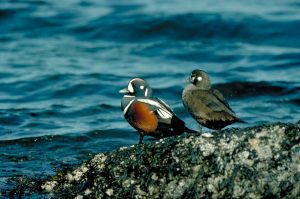 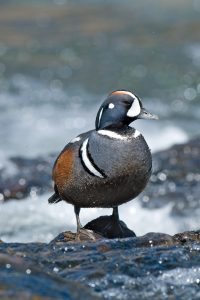 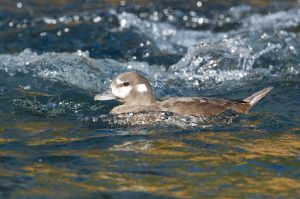 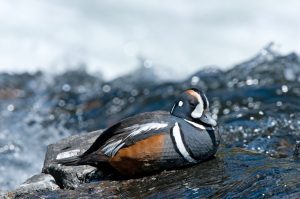 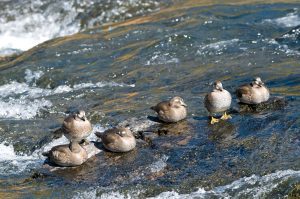