The northern pintail is a medium-sized dabbling duck with a slim profile, long narrow neck and pointed tail. Males have a chocolate brown head, white foreneck, blue-grey bill with black stripe and a long “pin” tail. Wings are grey with an iridescent green patch. Females are mottled brown and have blue bills with dark spots or mottling.

Northern pintails are found in shallow, fast-warming seasonal or permanent wetlands and prairie.

Pintails dabble or tip up to feed on moist-soil and aquatic plant seeds, pond weeds and aquatic invertebrates. They also feed on grains such as rice, wheat, corn and barley.

Females nest in open areas typically on the ground in low or sparse vegetation and cropland stubble. Pintails tend to locate their nests farther from water than other ducks. Hens lay one egg a day for an average clutch size of 7-9 eggs. She incubates the eggs for 22-24 days and leads the young to water within 24 hours of their hatching. Some pintails renest after their initial nests are destroyed but few renest more than twice. Ducklings feed without assistance and reach flight stage at 46-57 days.

Pintails breed from Alaska and the Canadian Arctic south to the Prairie Pothole region of southern Canada and the northern Great Plains of the United States.

Pintails winter along the Pacific and Atlantic coasts from SE Alaska and SE Massachusetts south to Mexico and Central America. 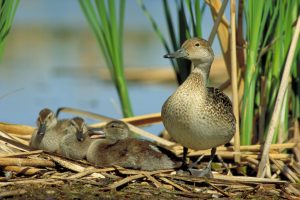 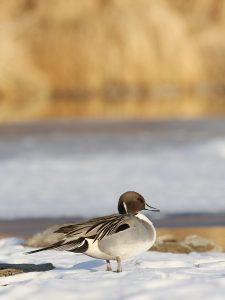 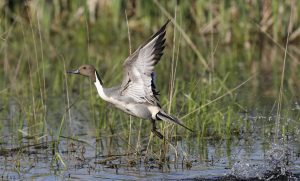 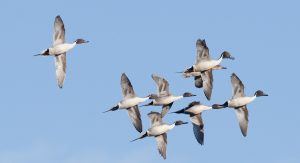 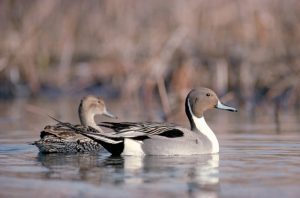