Northern shovelers are often referred to as “spoonbills” or “spoonies” because of their unique spatula-shaped bill. The breeding male has a green head, white body, reddish brown flanks, and a black bill. The female is grey-brown with subtle black streaking. She has an olive-green bill, a green speculum, and blue shoulder patches. At a quick glance, a hen shoveler could be mistaken for a female mallard.

Northern shovelers swim through wetlands, with their bills down in the water, swinging them from side to side to collect prey. Sometimes, large groups swim in circles to stir up food. In summer, their diet is dominated by small crustaceans, seeds, and larvae. In winter, they consume large quantities of small mollusks, aquatic insects, and zooplankton.

Northern shovelers begin pairing in December. Males use a variety of auditory displays to attract females. Females use their body, feet, and bill to make a small depression on the ground about 8 inches wide, usually within 150 feet of water. The nest scrape is almost completely surrounded by vegetation and is lined with downy feathers. Hens lay 8-12 eggs, which incubate for 22-25 days.

The northern shoveler departs from wintering grounds in late March and are one of the last ducks to arrive on breeding grounds. They breed in the prairie pothole and parkland regions.

Northern shovelers winter in the southern United States and Mexico. 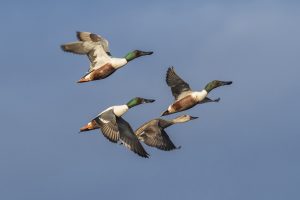 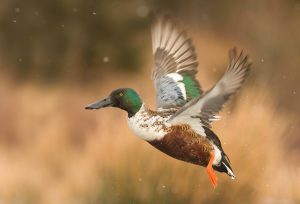 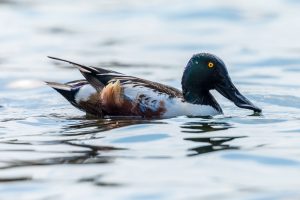 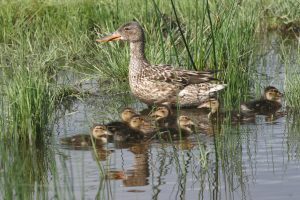