Wood ducks are a medium-sized perching duck. The breeding male has an iridescent green and white crested head, red eyes, red and white bill, chestnut breast, golden flanks and an iridescent back. The female is a drab version of the male but is considered striking compared to other duck hens.

The wood duck is mainly a herbivore, with plant foods such as seeds, fruits, aquatic plants, and acorns making up most of its diet. They also eats insects.

Wood ducks typically pair on the wintering grounds or on the return migration to the breeding grounds. They arrive on breeding grounds in April and nest in preformed tree cavities made by tree diseases, fire scars, lightning, and cavity-making birds like pileated woodpeckers for nest sites and also use artificial nest boxes. Females lay 7-15 white-tan eggs which they incubate for an average of 30 days. Male begins to spend less time with female once she begins incubating eggs. Females stay with young until they have fledged and then leave to undergo a feather moult.

Wood ducks breed in much of southern Canada and the eastern United States but is largely absent from United States Prairies, Great Plains, and southwest. 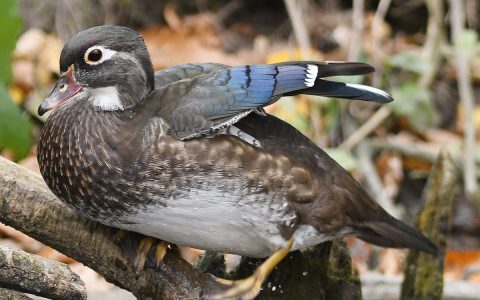 Watch inside a duck’s nest box 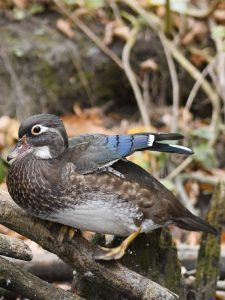 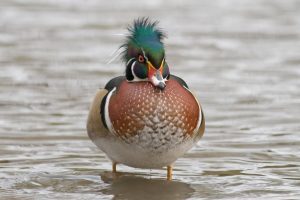 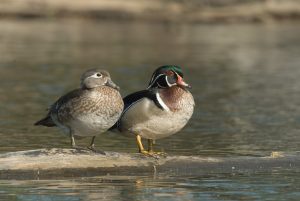 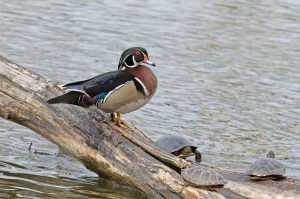