Though it’s impossible to feel, and seems impossible to imagine, the ground is shifting underneath us. Little by little, grain by solitary grain, the earth is separating from itself, and moving with the tides.

It’s the water that is guiding this movement. As waves crash into Canada’s shorelines, our coastlines are changing, washing away and revealing new stretches of beach that were once solid earth.

But there are ways to shift those grains of sand back. Ways to build up the ground beneath our feet, strengthening and rooting it to the spot. The problem may start with tidal forces, but water will also be the solution.

Reversing the Tide at Wallace Bay

Wallace Bay in northern Nova Scotia is perched on the shores of the Northumberland Strait. Administered by Environment and Climate Change Canada’s Canadian Wildlife Service, the Wallace Bay National Wildlife Area consists of more than 1,433 acres (580 hectares) of marshes, fields, and forests. Developed in the 1970s, DUC partnered with the Canadian Wildlife Service (CWS) to create managed wetlands that became home to species like the ring-necked duck, blue-winged teal, and American black duck. At Wallace Bay, biodiversity has flourished here for 50 years, with DUC and CWS working together to monitor habitat conditions, adjust water levels and maintain the infrastructure.

But over time, with sea levels rising, one of the segments (Wallace Bay #3) became more challenging to oversee. Tides were topping the dike, speeding up its erosion, and making it harder to maintain. The mix of saltwater and freshwater in the ecosystem wasn’t as welcoming to plants and wildlife that originally called the area home. After consultation, CWS and DUC decided the best thing to do was restore the site to the original salt marsh.  Not only would that let the area take care of itself, but it would also strengthen it against future erosion.

“As the tide comes into the salt marsh, it’s a kind of slack tide, and there’s not a lot of movement to the water. The soil particles will actually flocculate out of the water, and they’ll deposit on the surface of the marsh,” explains Lee Millett, a conservation program specialist with DUC. “That will build up the marsh over time.”

With that end goal in mind, the DUC team got to work in September 2020, breaching the dike around Wallace Bay #3 and working to carefully connect the tidal channels together again. The work is a bit tricky, as those sediments can build up, blocking the original routes. Luckily, the same forces that push those sediments in place can also force a new path for water to flow. “Over time, the marsh will erode in places and create its own channel. So we’re relying on the natural force of the tide, creating the ability for it to do what it needs to,” says Millett.

As sediments build up, we actually see a buffer of land created in the intertidal zone from the physical forces of the marine environment. Plus, the cordgrasses take in carbon to grow, and they also solidify those soils as well. From a waterfowl perspective, these tidal wetlands will be important areas for Canada geese and American black ducks during migration.

With the tide now flowing, salt water is pouring back into the marsh, revealing mud flats and letting the seeds of salt grasses buried deep in the soil pop back to life. Millett says there are some immediate changes to the marsh, but most of the acreage has pockets of transition. In patches of marsh that are shallower, freshwater plants and cattails could hold on for years before giving way to reedy cordgrasses.

But it’s this transition that’s fascinating to watch. As the salt marsh develops, the vegetation grows and changes along with it. There’s the first colonizer cordgrass species that takes root in the initial plunge of new water. As the marsh rises and elevates with more sediments, the successional plants come in. And all the while, these changes are crucial for combatting climate change.

These changes can happen incrementally, slow enough to fool the eye into thinking the marsh is quiet and still. That’s why the most important part of the process continues years after the original work is done. DUC has partnered with the Confederacy of Mainland Mi’kmaq (CMM) to monitor both the Wallace Bay site and a control salt marsh, located just a kilometre away.

Teams from CMM took drone video of the two sites in July, before the work had started. As Lauren Lawrence, the coastal restoration project coordinator for CMM explains, it’s crucial to know where you’re starting from in any monitoring project. “You get a snapshot of the conditions of the site prior to restoration so that you have that data to compare to and see how the site changes after restoration. So just gives you kind of a baseline so that you can look back and say, yes, these changes have happened.”

Monitoring will continue on a yearly basis for at least three years. In that time, Lawrence expects to see a return of several fish species, including striped bass, salmon, trout, and gaspereau. In addition, CMM is hoping to see a resurgence of sweetgrass, a common salt marsh plant, and one that’s particularly important to the Mi’kmaq. “Sweetgrass is used ceremonially, and for smudging,” says Lawrence. “It’s usually found within salt marshes in the high marsh, on the borderline between salt and fresh water.” Sweetgrass was found at the nearby salt marsh, so the hope is it can take root once again in Wallace Bay.

Salt marsh restoration is one tool among many to combat coastal erosion and beat back climate change. As DUC looks to manage coastal infrastructure and conserve wetlands, often the best solutions are to return sites like Wallace Bay to their natural states. While bigger changes take time, if we wait, we can watch the earth move under our feet.

We wade into the rising challenge on Canada's coasts. 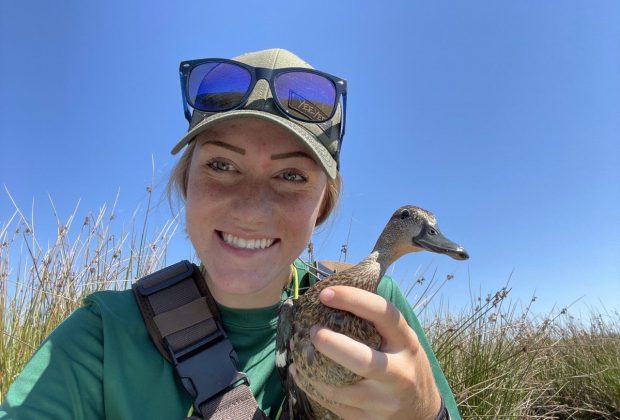