On World Wetlands Day, a reminder of the critical importance of natural green infrastructure

World Wetlands Day is a critical reminder of the important roles these fragile ecosystems play in our communities. They are a biological resource akin to rainforests and coral reefs, storing carbon.

They are an epicentre of life that cannot be replicated. When wetlands suffer, so too does the immense biodiversity they support. They are the lifeline for migratory birds along the Pacific Flyway. More than eight million pass through the Lower Mainland and Vancouver Island coast during migration and the winter.

Wetlands act as a buffer to storm surges, swallowing excess water that would otherwise flood coastal communities and wreak destructive financial damage. They provide communities with recreation opportunities and a haven for wildlife.

However, across B.C., the struggle to protect and restore wetlands continues. An estimated 80 per cent of wetlands have been destroyed or altered in developed areas across the province.

In Nanaimo, B.C., Buttertubs Marsh Conservation Area is the perfect example of the value a wetland can have for a community; an important role not lost on the city’s environmental planner, Rob Lawrance.

The area was a shallow lake drained in the mid-1800s and used as pasture and dairy production. Purchased by the Nature Trust of B.C. in 1975, they leased it to the province with DUC, the City of Nanaimo and others joining as partners. Thanks to upgrades by DUC and local groups over the years, the 55-hectare conservation area not only provides a tranquil setting for walks, but it also provides a natural infrastructure that would cost the city millions to replicate, says Lawrance.

“The value of this wetland as a way of not just cleaning water from the storm systems, but also acting as a mitigative reservoir from potential flood damage for the community, is quite significant,” says Lawrance. “

“What’s the replacement value, as a storm feature that’s building resiliency against potential climate change and flooding? When you looked at some of the storm projections, it easily tops $10 to $15 million in value, and that’s not looking at the land prices per-year kind of value.”

The wetland value was first brought into focus when it was part of a pilot study,  the Municipal Natural Capital Initiative pilot study. Nanaimo joined five other communities in the study, organized by the David Suzuki Foundation, the town of Gibsons, and other partners.

Lawrance also points out that it would cost the city between $4.7 million to $8.3 million to replicate what the marsh provides for water filtration.

“I think the importance of the study proves the value of wetlands as a way of not just cleaning water from the storm systems, but also acting as a mitigative reservoir from potential flood damage.”

As the threat of climate change comes into focus for coastal communities like Nanaimo, Lawrance says the city’s engineering staff recognizes the need to adjust water modelling to adapt to future storm infrastructure.

“Having intact wetlands as a buffer, there is a recognition that they play a key role in that as well. There is some resilience and they create adaptation and the opportunity to take some of that stormwater that would be coming down system.”

For DUC in B.C., having partners in communities like Nanaimo recognize the significant role wetlands play is always welcome news.

“We have had a strong partnership with Nanaimo, and that shows with their commitment to Buttertubs Marsh,” says Sarah Nathan, manager of provincial operations for DUC in B.C. “It’s an example of what biodiversity means to a community. It brings together people, nature, and wildlife while providing real, tangible economic benefits. That’s why investing green infrastructure pays off.” 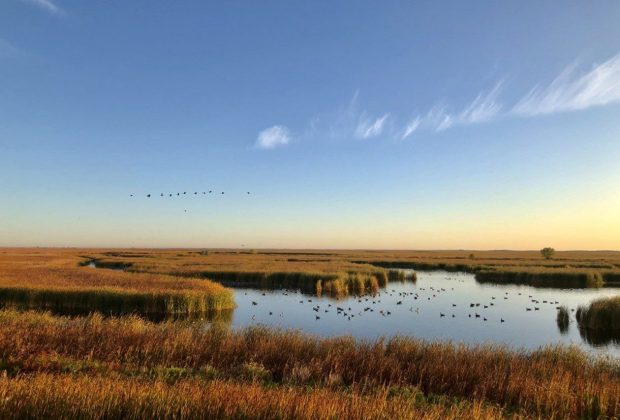