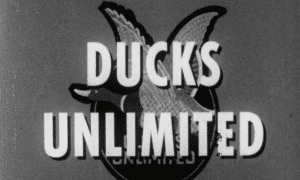 By this time in the 1950s, 400 DUC projects (also known as “Duck Factories”) were spread across Manitoba, Saskatchewan and Alberta. We’re given a glimpse into the different ways DUC conducted its conservation work, such as constructing berms and dams with modern machinery, doing controlled burns, waterfowl banding and aerial surveys. Even in black-and-white, the beauty of prairie wetlands and skies filled with waterfowl is awe-inspiring.

A Dam Site tells the story of several conservation projects located in the Prairie Provinces, including Ducks Unlimited Canada’s first ever project at Big Grass Marsh in Manitoba.

Water is Life spends the first 13 minutes talking about the importance of water to all life of earth.