Common loons are about two times larger than a mallard duck. A mature common loon sports a formal black and white appearance that is as highly recognized as its call. The loon’s head and pointed bill are black and offset by red eyes. The neck features a collar of short white vertical stripes. The long body is checkered black and white on top and the underside is a silvery white. Rarely seen anywhere but on more temperate coastal areas during winter, the loon becomes hardly recognizable with a dull grey body, a dingy white throat and brownish eyes during this season.

Common loons catch their prey with expert diving techniques. They shoot through the water, propelled by powerful thrusts of their feet. They are agile swimmers and can change course underwater to keep up with their prey. Their diet consists of mostly fish, such as perch and sunfish found in the northern lakes they inhabit. When fish are scarce, they will eat crustaceans, snails, leeches, and aquatic insect larvae.

Common loons can be found across Canada, Alaska, and the northernmost parts of the continental United States. Both males and females tend to wander and use many different lakes as “floaters” for 2-3 years before settling.

Nests are usually started in June and are generally constructed with pieces of floating vegetation and placed on a sheltered point directly on the water’s edge so the nesting loon can quickly reach the water when threatened. Loons are rarely seen near their nests. To protect the nest they desert it well before a predator arrives and distract the intruder by appearing far out on the water. Usually two dark greenish or brownish eggs camouflaged with darker spots are laid and both birds take shifts on the nest, incubating for about 30 days. When hatched, young loons are thickly covered in dark brown down and can swim immediately, though they are frequently seen riding on their parent’s backs during their first few weeks.

They are a medium-distance migrant, migrating south across the continental United States and northern Mexico for winter. 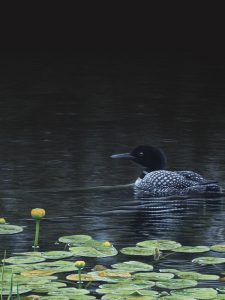 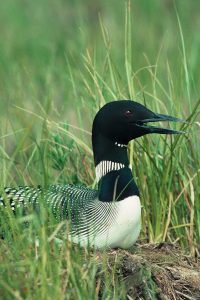 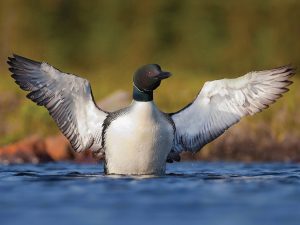 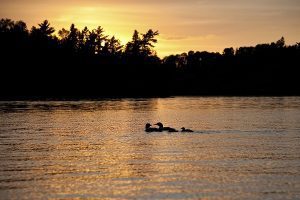 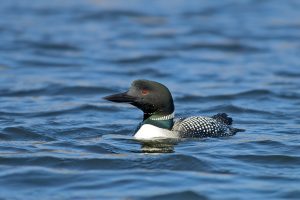