A duck in spring

Each spring, Canadians herald the sights and sounds of waterfowl as they flock to their nesting grounds. But after their long trips, life for our feathered friends isn’t easy. Ducks – especially females – undergo arduous physical and biological processes before, during and after their journeys. And once here, most hens have one shot to raise a brood.

It’s early June on the Saskatchewan prairies. A slight breeze gives her wings a lift as she circles over a patch of native grassland next to a shallow pond. She decides to land in a small clearing, then walks into the grassy cover. It’s the third spot she’s scouted. She feels safe here.

In the coming days, this blue-winged teal hen will construct a nest with nearby vegetation and line it with down plucked from her breast. She’ll feed on invertebrates to build her energy for an important role: producing a brood.

It’s no easy gig. She’ll need all the energy she has to give.

When male and female waterfowl prepare for their journey from their southern wintering grounds northwards to Canada, they do so in similar ways. The process differs between the sexes once they arrive. David Howerter, PhD, director of national conservation operations at DUC explains how, and why ducks do what they do – before and when they get here.

A shared experience: preparing for migration

Feeling restless – Ever wonder what pushes migratory waterfowl to bid adieu to their warm winter homes? It’s a physiological process called zugunruhe (pronounced: zoo-gun-roo). This German term refers to the restlessness birds experience as migration nears. Zugunruhe is triggered by the endocrine system (a collection of glands that release hormones into their blood stream) in response to longer daylight hours. “As it gets closer to the time for these birds to migrate they become increasingly active,” says Howerter. “They’ll spend more time flying and their movements will begin to orient in the direction they intend to migrate.”

No exceptions – Zugunruhe impacts migratory waterfowl wintering close to the equator, where daylight hours remain consistent, year-round. This may be a result of evolutionary hangover from when the species had a different distribution, or because of the changing angle of the sun.

Packing on the pounds – “Before ducks begin their journey north, they’ll go through a phase biologists refer to as hyperphagia, where they’ll spend a lot of their days consuming calories,” explains Howerter. “This is done to prepare for their long trip.” Like zugunruhe, hyperphagia’s also triggered by hormonal changes, influenced by changing daylight hours.

Growing closer – Migratory waterfowl can only procreate from spring until late summer. This is because in the “off-season” their reproductive organs shrink, making it easier to fly over long distances. As birds close in on their breeding grounds, their endocrine system releases hormones that stimulate their reproductive organs to grow larger again in anticipation of breeding.

It’s all about her: producing a clutch

Once waterfowl arrive at nesting sites, the male-female experience begins to diverge. “Once they have fertilized the eggs and the hen is incubating, the drakes will take off. Often they’ll go further north, to the boreal forest,” says Howerter.

Meanwhile, the hens prepare for one of the most difficult processes they’ll go through in their lifetime: producing a clutch of eggs.

Size matters – How waterfowl behave once they arrive at the nesting site depends on whether they’re capital or income breeders. “Capital” breeders are large-bodied ducks that can store enough energy (calories) to migrate thousands of kilometres and arrive ready to lay a clutch of eggs, and incubate them for about 30 days. One example of a capital breeder is the common eider, which averages between two and six pounds.

“Income” breeders like the far smaller blue-winged teal (weighing in at 400 grams) are unable to sustain the same kind of fuel reserves. When they arrive at the nesting grounds, they’re looking for protein- and calcium-rich foods, like invertebrates, that provide the nutrients they need to produce a clutch of eggs.

Medium-size waterfowl like mallards fall somewhere between capital and income breeders. “Birds of average size usually have enough nutrients to initiate the first clutch of eggs, but they don’t have enough reserves to re-nest,” says Howerter. However, some duck species (like mallards, which are persistent re-nesters) will produce a second or third clutch if their first one is unsuccessful.

Nesting is natural – Birds, like people, experience the urge to nest before they welcome offspring into the world. Expectant bird and human parents alike can trace this feeling to the hormone prolactin. Prolactin is released into the blood stream by the pituitary gland, found at the base of the brain.

Laying a clutch of eggs – A hen’s pituitary gland will also release two hormones that stimulate egg production: follicle-stimulating hormone and luteinizing hormone. They trigger ovulation. Once a duck begins to ovulate, a drake can fertilize her egg – then things begin to take shape. “Once the ovum is fertilized the egg starts to develop. The yolk provides nutrients to the developing embryo and albumen (egg white) is deposited around it, followed by the shell. About seven days later, the hen will lay an egg,” says Howerter.

A blue-winged teal hen will lay between six to 14 eggs, provided she has the energy required to develop them. “Producing a clutch is very energetically expensive,” says Howerter. “In humans, it can be compared to giving birth to an eight-pound baby once a day for nine to 10 days.”

Sitting still – Once a duck has laid her eggs, she will spend nearly one month incubating them. While some ducks, like common eiders, will stay on their nest nearly continuously, other birds take more frequent breaks to eat. “But even they will lose roughly 30 per cent of their body weight,” says Howerter. In some cases, hens may abandon their clutch if conditions become unfavourable (bad weather, predators, disease).

Crack! – The eggs have hatched. Finally, mom can focus on relaxing and refueling, right?  “Not exactly,” says Howerter. Instead, she’ll help her ducklings find food high in protein and calcium, required for muscle and skeletal development. While ducklings are precocial (mobile after hatching), they still need help to find suitable habitat and food.

Bidding farewell – After 30 to 40 days, many hens will leave their broods to prepare for moulting (the process in which ducks lose their flight feathers). “The ducklings are on their own after that,” says Howerter, noting at this point young waterfowl are able to source their own food. At a month old, ducklings are also faster and stronger, making them far more difficult for predators like foxes, raccoons, red-tailed hawks and mink to catch and eat.

Back amidst the grasses, the blue-winged teal hen has hatched a healthy brood of ducklings and led them to the nearby wetland. In future years, these ducklings will return to the prairie landscape to produce their own offspring and repeat this fascinating but strenuous process of duck-rearing.

Continuing that cycle depends on a key ingredient, says Howerter. “Good habitat across Canada’s waterfowl breeding grounds is essential to overcoming the many challenges of successful reproduction for returning birds.”

Healthy and plentiful habitat. It’s the best welcome mat we can roll out for waterfowl every spring.

Article by Julielee Stitt – originally featured in the Spring 2017 issue of Conservator magazine. Get your copy by becoming a DUC supporter today! 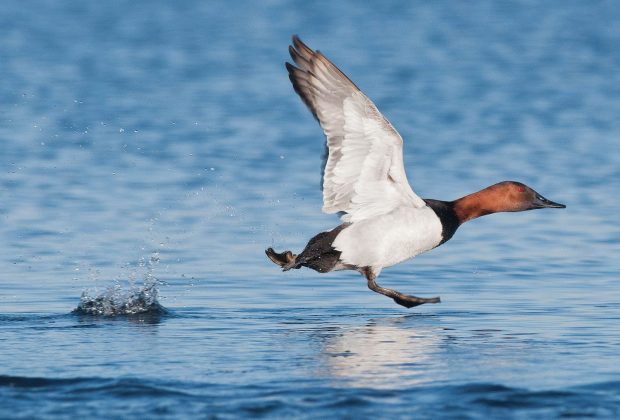 Scientist continues a 50+ year tradition of canvasback surveys on their breeding grounds.