Over a decade ago, Maclean’s magazine gave Lake Winnipeg the regrettable distinction as Canada’s sickest lake. Since then, things have only gotten worse.

One of the largest lakes in Canada, Lake Winnipeg has a sprawling drainage basin of nearly a million square kilometres. Hundreds of sinuous tributaries weave and wind across this entire area —spanning four provinces and four U.S. states —picking up pollution from industrial, municipal and agricultural sources along the way. Eventually all this water and accompanying not-wants reaches its final destination and is discharged into Lake Winnipeg.

It’s these ingredients —nutrients like phosphorus and nitrogen, along with contaminants from numerous other sources —that have been central to the lake’s deteriorating water quality and have plagued it with harmful algae blooms of increasing size and frequency.

Efforts to improve the health of Lake Winnipeg hinge on reducing this pollution. While industrial and municipal sources across the drainage basin are gradually being addressed, agricultural run-off is believed to be the main culprit. Reducing this non-point source pollution requires a different strategy, one in which wetlands play a key role.

Functioning as kidneys on the Prairie landscape, wetland plants and soils filter and break down contaminants, resulting in water that is cleaner leaving than entering a wetland basin. Conserving and restoring wetlands across Lake Winnipeg’s entire drainage basin will be critical to improving water quality and overall lake health.

In neighbouring Saskatchewan, the Cowessess First Nation (CFN) and DUC are partnering on a project to reduce the nutrient loading that’s making Lake Winnipeg sick. Together, we’re working to restore wetlands in one corner of the vast drainage basin.

Through the Assiniboine River Basin Initiative and with funding from Environment and Climate Change Canada, CFN is working with DUC and local watershed groups to restore 82 acres (33 hectares) of wetlands, incorporating both Indigenous knowledge and science in the project.

For CFN, this project fits with the First Nation’s view that maintaining the health of the land under its care is essential and will bring lasting benefits to many.

“By restoring wetlands and grasslands that were drained or altered, we bring life back to these areas and ultimately bring habitat for wildlife back to our lands,” says Loretta Delorme, director of CFN’s Lands and Natural Resources Department. “This will provide benefits to species at risk while also delivering water quality improvements, buffering of floods and erosion control.”

CFN and DUC also share in other conservation efforts that deliver benefits to downstream residents. Over the past few years, DUC has signed long-term leases on 13 quarters of CFN lands. The total impact of these agreements is substantial: 2,000 acres (810 hectares) of habitat conserved, including 470 acres (190 hectares) of wetlands and an additional 33 acres (14 hectares of wetlands that have been restored.

CFN sees these agreements in keeping with their land management goals. “When we consider the land’s health, we pass on sustainability to the next seven generations,” says Delorme.

This may be just the kind of long-range thinking that puts Lake Winnipeg back on the road to good health. 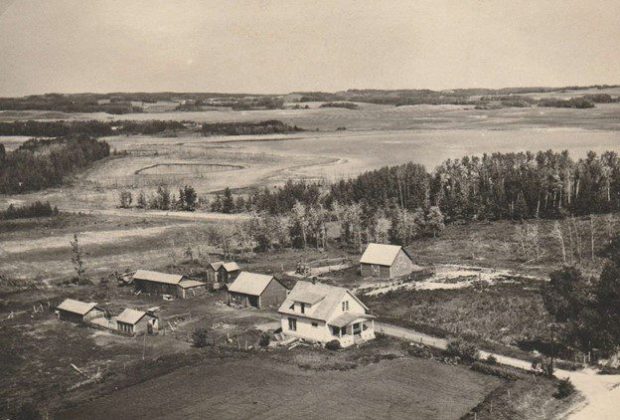 DUC works with private landowner to restore and conserve critical ecosystems on their donation of land in Alberta.