For nearly a decade, Karen Lavigne battled a fast-growing aquatic plant which would take over her small pond, year after year.

“Every time I would rake it or pull it out, it kept coming back,” she explained.

Lavigne lives near Mallorytown, Ontario, and installed the pond in 2010 as a decorative water feature in her yard. In time, she realized that something was wrong and made the wise choice to contact the Ministry of Environment, Conservation and Parks.

“Once I realized that this plant had the potential to negatively affect the waterways around me, I reached out to the Ministry of Environment who suggested I contact Ducks Unlimited Canada,” she explains.

Kyle Borrowman, conservation specialist with DUC, took samples of the aquatic plant in the pond for expert identification at the Ministry of Natural Resources and Forestry.

“Once those samples came back with a positive identification, we knew we had to stop the potential spread of the plant,” he explains. “Successful removal of this invasive species was likely because it was not a high-traffic area, the parrotfeather was in an isolated space, and had not spread to other areas yet.”

Fast action needed to stop the spread of parrotfeather

Parrotfeather is rare in Ontario. The plant is native to South America, but it can overwinter in many parts of the province. It was important to stop its proliferation in southeastern Ontario, which contains some of the province’s most important wetlands.

Swift action by DUC was facilitated by an investment from the Invasive Species Centre.

Borrowman consulted on the best course of action with DUC’s invasive species control staff in British Columbia, where the green, fern-like perennial is a bigger problem, and determined that the small pond could not be “cleaned” of the plant.

Lavigne’s water feature was removed, and the plant and its roots were secured to protect the area’s naturally occurring wetlands, streams and rivers.

“Karen is a great example of somebody who was willing to do the right thing to protect our ecosystems and we were happy to work with her,” says Borrowman.

Doing the right thing to protect wetlands and waterways

“Parrotfeather poses a very serious threat to the Great Lakes basin. It can aggressively outcompete native species and affect recreational and navigational uses of a waterway. I commend Ducks Unlimited Canada and the Invasive Species Centre for their rapid response efforts to prevent the spread of this invasive aquatic plant to new locations,” said the Hon. Jeff Yurek, Minister of Natural Resources and Forestry. “My ministry is pleased to support partnerships with these organizations to prevent the introduction of invasive species that are harmful to our environment and economy.”

Lavigne was sorry to lose the pond. Her daughter was married beside it and the pond was a reminder of that day. “But I am so glad that this is the consequence, rather than have parrotfeather in our waterways getting out of hand.”

What can you do about invasive plants like parrotfeather?

If you suspect that an invasive plant is growing in a landscaping or water feature at your home or place of work, contact the toll-free Invading Species Hotline at 1-800-563-7711, or visit EDDMapS Ontario to report a potential sighting. 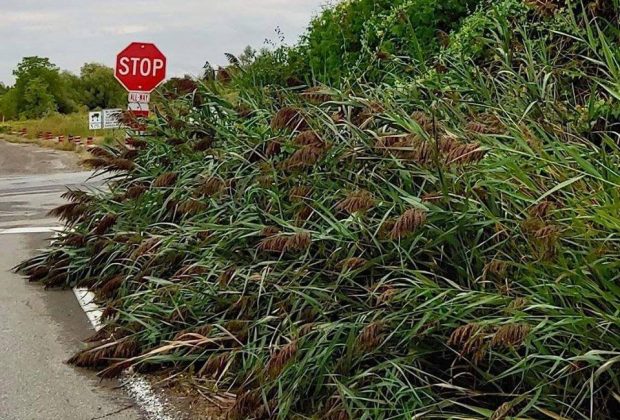