Celebrating bird migration around the world

Our tribute to North America’s waterfowl and other migratory birds—and the habitat that keeps them soaring.

Every spring and fall, millions of migratory birds take to the skies.

other in one of nature’s greatest spectacles.

This is our tribute to North America’s waterfowl and other migratory birds—and the habitat that keeps them soaring. 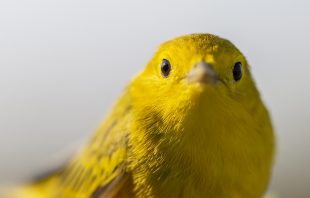 Migration: Fuel for the Journey

Discover how birds fuel up before and throughout the migration journey.

The spring and fall migrations of birds in North America are amazing feats of strength and endurance. The energy requirements and the physical demands on birds of all sizes are substantial. Some migrating species make their journeys with no stops and the trips may span several days.

What species are you spotting? Take part in a nationwide citizen science effort by recording the birds you’re seeing in your backyards or wherever you enjoy the outdoors with DUC’s Migration Tracker. 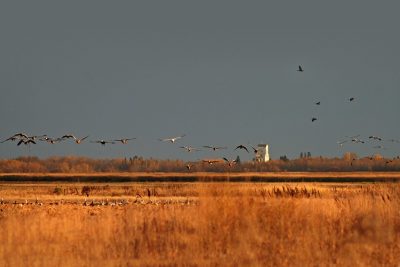 Sharing the responsibility and rewards of waterfowl habitat conservation

Get to know Canada’s migratory birds

Check out North America’s four major migration pathways, known as flyways, and the waterfowl species that travel these highways in the sky.

The Pacific Flyway stretches from the Arctic to the west coast of Mexico and the Rocky Mountains to the Pacific Ocean. It encompasses the most varied waterfowl habitats in North America.

Who are you calling a baldplate? Because the white stripe on the American wigeon’s head was thought to resemble a bald man’s head, this medium-sized dabbling duck earned an interesting nickname. We think a white crown is a far more flattering comparison!

The American wigeon is a northern explorer. This species breeds further north than any other dabbler, except for the northern pintail. Breeding grounds for wigeons stretch up to Alaska and through the tundras of Canada.

In the Pacific Flyway, American wigeons are treasured birds and are recognized as a Pacific Birds Habitat Joint Venture priority species. This means a host of conservation groups like DUC are working together to ensure populations have the habitat they need to thrive.

DUC is working hard to saving space for American wigeon in B.C.’s Fraser River Estuary. Many of these ducks call the estuary their home year-round. But rapid urban and industrial expansion are threatening the habitat they depend on.

Learn what DUC is doing to save the Fraser River Estuary for wigeon and other wildlife. 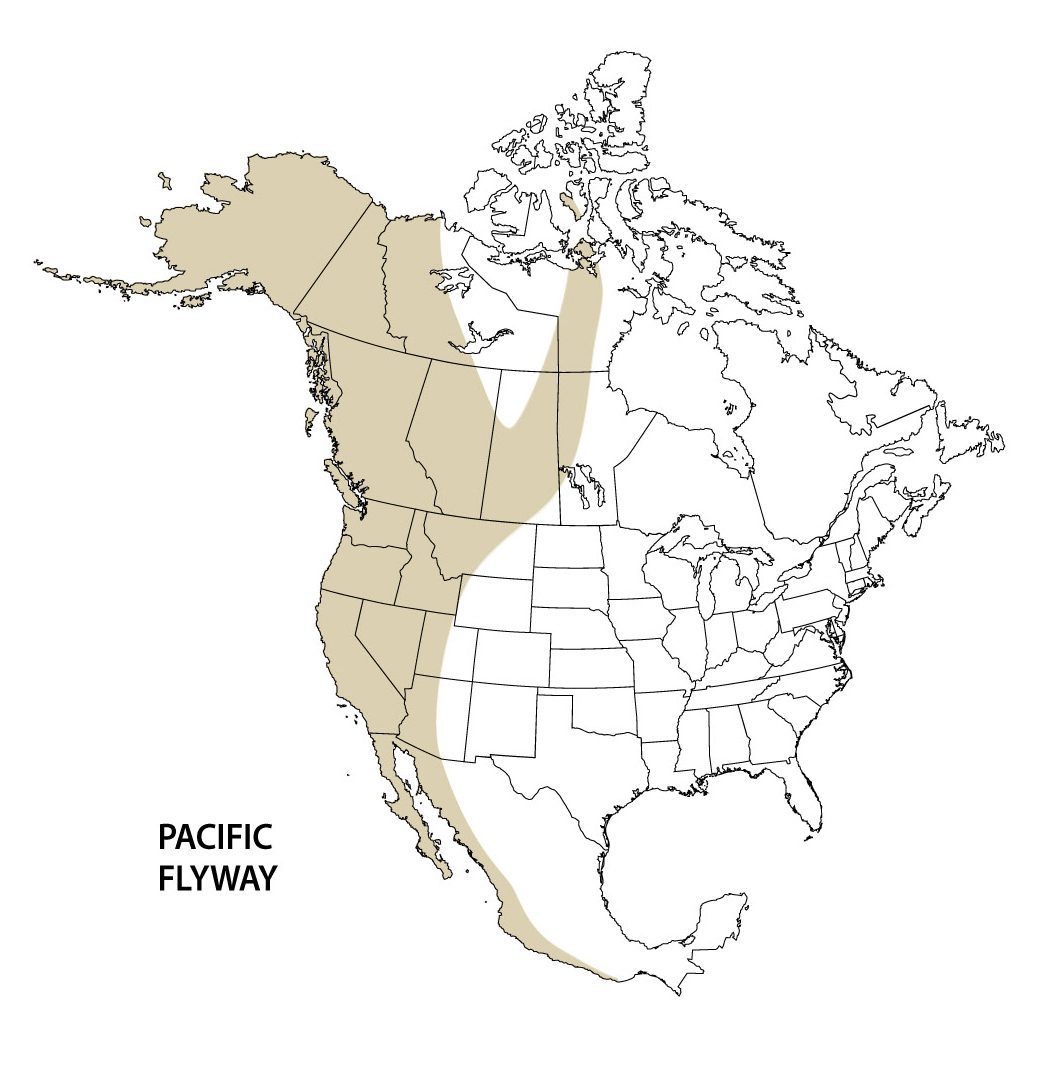 Other waterfowl species that use the Pacific Flyway include:

The Central Flyway encompasses a large portion of North America’s interior. From Canada’s boreal forest and parklands across the Great Plains down to the Texas Gulf Coast, this flyway is home to a large percentage of North America’s ducks and geese.

Northern pintails are long, slender ducks with long, narrow wings, earning them the nickname “greyhound of the air.” They are among the first ducks to migrate south in the fall and north in the spring.

Pintails once were one of the most abundant ducks in North America but have suffered a disturbing decline since the 1970s, mainly due to changes in cropping practices in the Canadian prairies. Pintails often use standing crop stubble early in the spring for nesting, and the decline of idled cropland, and the expansion of minimum-tillage annual cropping practices, has negatively affected survival of their nests.

While pintails and their habitats face serious threats on their breeding, migration, and wintering areas, there is cause for optimism about the future of these magnificent birds. Progress is being made in conserving crucial pintail habitats through the work of Ducks Unlimited affiliates in Canada, the U.S. and Mexico as well as a host of state, provincial, federal, and private conservation partners under the banner of the North American Waterfowl Management Plan.

Here in Canada, DUC is helping the northern pintail recovery efforts by encouraging the planting of winter wheat on the prairies. Our research shows that unlike spring-seeded crops, winter wheat is planted in the fall and remains undisturbed throughout the spring nesting period, giving nesting pintails a much better chance of hatching more “greyhounds of the air.” 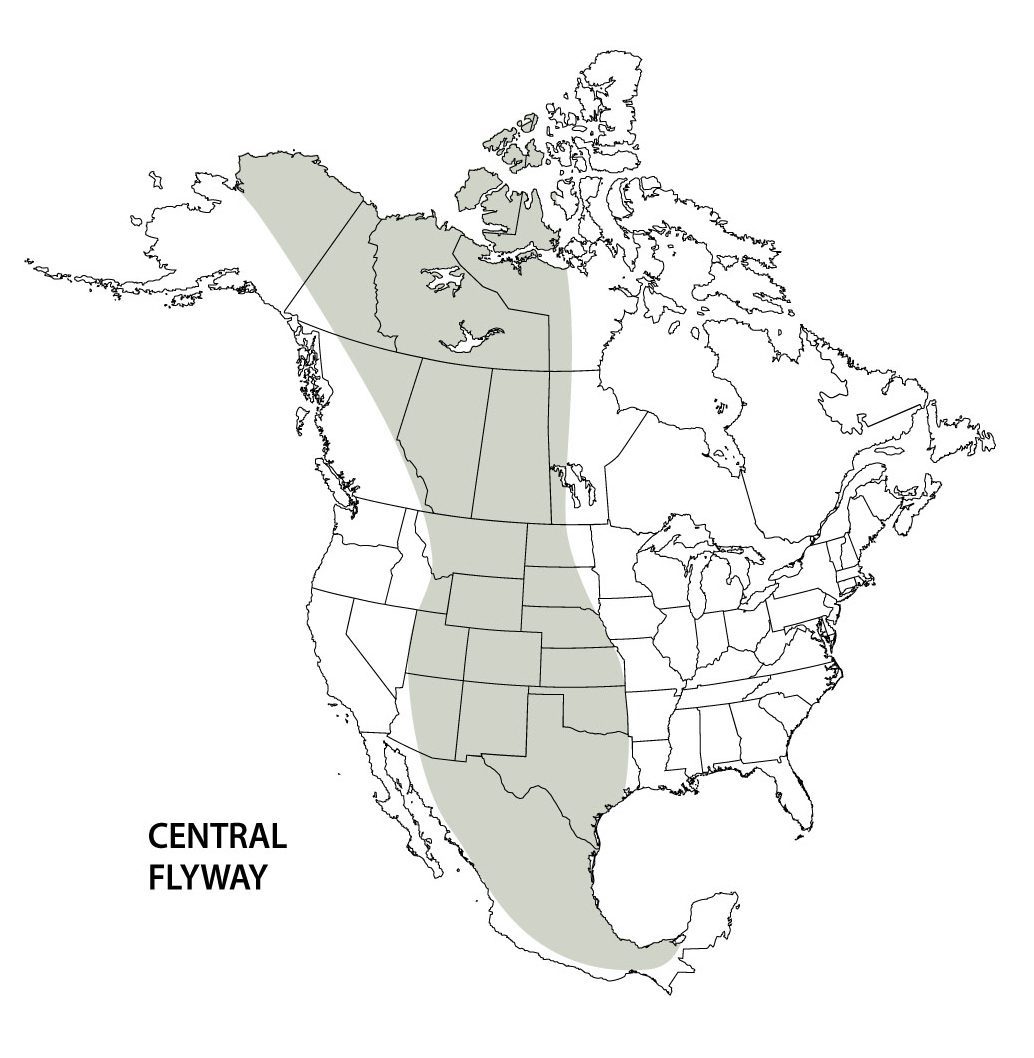 Other waterfowl species that use the Central Flyway include:

The Mississippi Flyway runs from Hudson’s Bay to the Gulf of Mexico, crossing over the Great Lakes and following the Mississippi, Missouri and Lower Ohio rivers in the United States. About 40% of all North American migrating waterfowl and shorebirds use this flyway.

Blue-winged teal begin their fall migration early, leaving breeding grounds well before other species in the fall. They are long distance migrants, and some birds will fly all the way to South America for the winter. Blue-winged teal are the second most abundant duck in North America, behind the mallard, and their population is stable. Like other ducks, blue-winged teal are vulnerable to wetland loss or degradation.

The blue-winged teal is a gregarious bird, associated in flocks and often seen socializing with other species of waterfowl. Small groups can be spotted standing on stumps or rocks at the water’s edge or dabbling in the water for food. 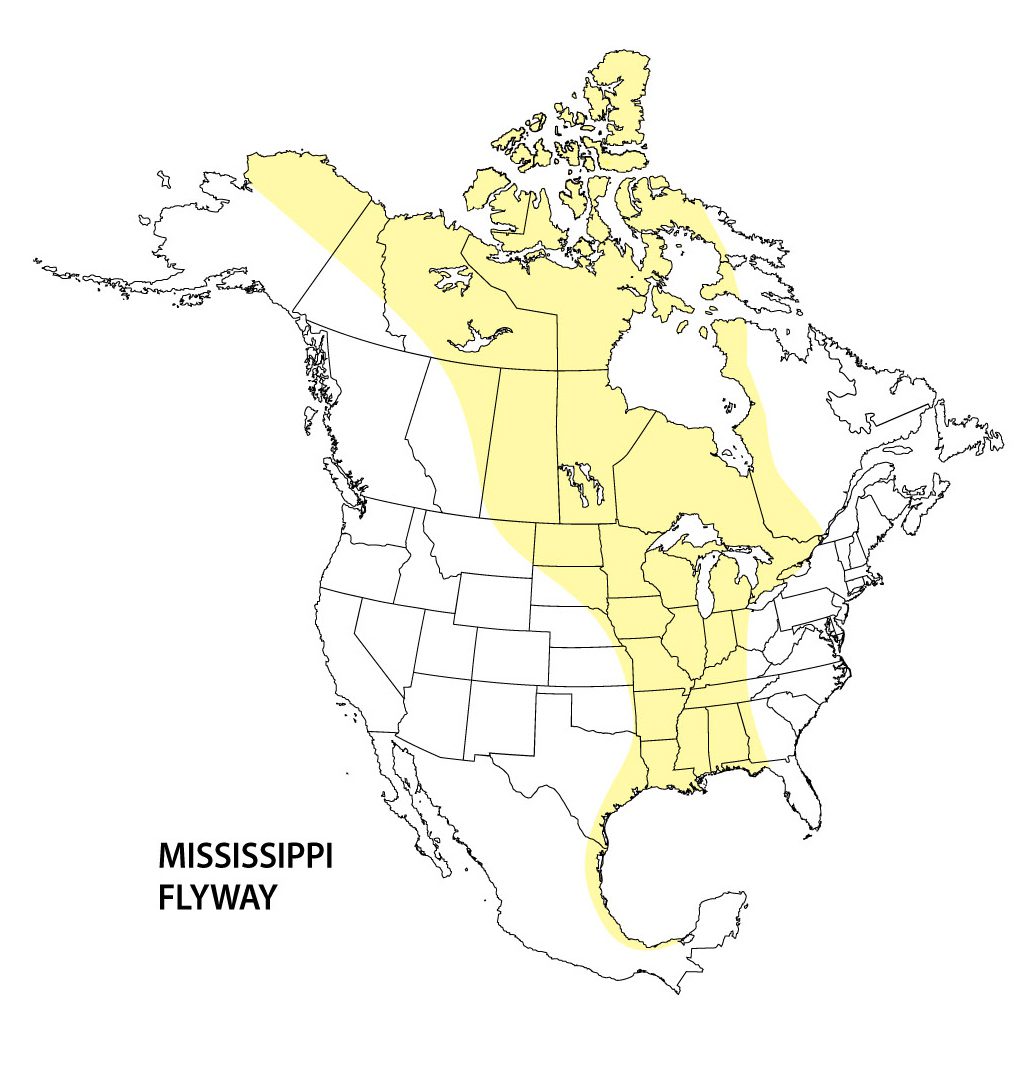 Other waterfowl species that use the Mississippi Flyway include:

The Atlantic Flyway stretching from the Arctic tundra of Baffin Island to the Caribbean. The Atlantic is the most densely populated of the four flyways and large portions of waterfowl habitat are being threatened by development.

As North America’s largest duck, the common eider spans from the Arctic to the mid-Atlantic states. Eider down is one of the lightest and most effective insulators, perfect for their Arctic environment, often plucking their own down to build warm nests. Eiders don’t breed until they’re at least three years old and they have small clutches of four to six eggs, compared to mallards, which breed after one year and have clutches of one to 13 eggs.

DUC is committed to conserving eider habitat. Through DUC’s Institute for Wetland and Waterfowl Research, our scientists and research partners have been studying the effects of climate change on waterfowl and our volunteers have successfully supported efforts to increase eider populations. 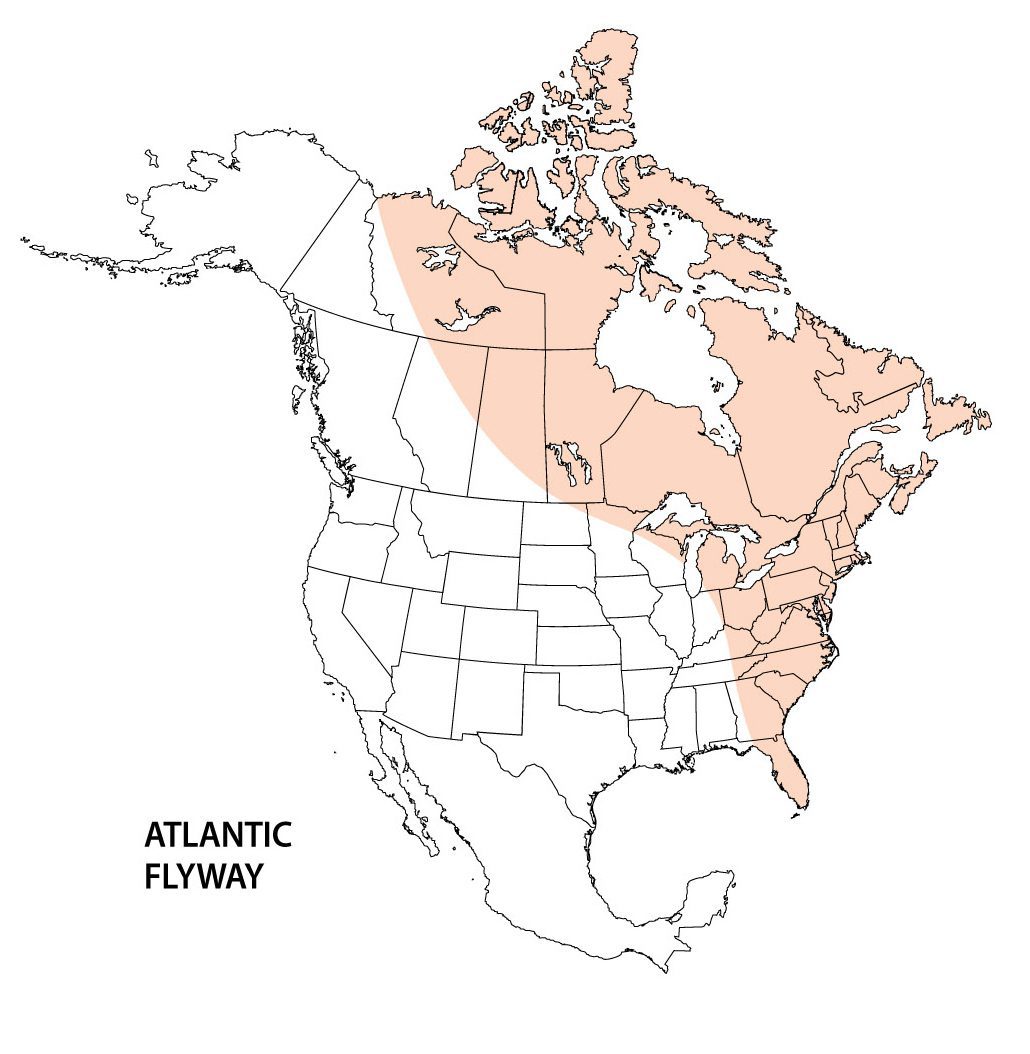 Other waterfowl species that use the Atlantic Flyway include:

Ducks from a distance: helpful hints for identification in the wild

Tips from waterfowl experts on overcoming identification challenges for the 20+ species of ducks that live in North America.

Up to 20 per cent of North America’s waterfowl migrate to overwinter in Mexico. But the wetlands they depend on there are threatened. That’s why committed conservationists are working tirelessly on their behalf, to protect these unique habitats.